How, When & Where to See Northern Lights in Iceland (FAQ Answered & Tips) 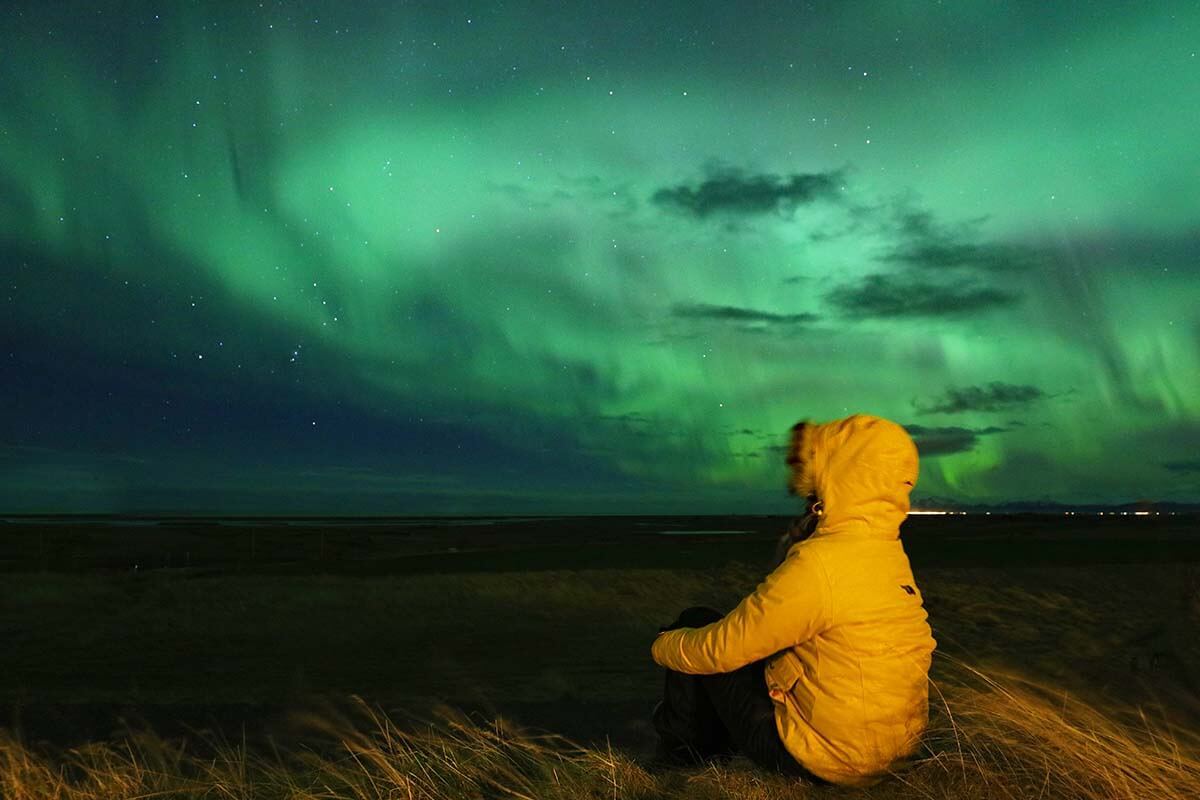 Are you thinking of visiting Iceland in winter and are wondering where and how to see the Northern Lights in Iceland?

I run a Facebook group for Iceland and Scandinavia travel and it always amazes me how often this question gets asked by people who are planning a winter trip to Iceland. I also get aurora-related questions on the blog all the time…

TIP: While seeing the Northern Lights is a real bucket-list experience, try not to focus on it as the sole purpose of your trip. There is so much to see and do in Iceland, including so many other great winter activities, such as snowmobiling, glacier hiking, ice caves, etc.

So make sure to create a really nice Iceland winter itinerary for your trip, so that you have a wonderful time either way. And if you get to see the auroras, then it will be just the cherry on top.

Good to know: All the aurora pictures in this article are mine and taken during several trips to Iceland. These are real images of what the Northern Lights in Iceland can look like and what you are most likely to see. This should give you a better idea of what you can expect in reality, which is usually very different than the picture-perfect aurora displays at the most scenic locations that you see in the travel brochures. Very different, indeed, but still amazing. Find out!

There is not one specific month that’s better for auroras than the other. It’s a natural phenomenon and it remains a question of luck. If you look purely at the solar activity, then the prime time for seeing the Northern Lights is during the Equinox, which is the last two weeks of September and the second and the third week of March. However, it’s never guaranteed and so much also depends on the weather.

The most spectacular aurora display I have ever seen was in Iceland in November. And the ones I saw in September were nothing compared to that. So you really never know.

Can you see Northern Lights in Iceland in summer?

No, you cannot see the Northern Lights in Iceland in May, June, July, and the biggest part of August. It just doesn’t get dark enough in the summer months. Summer is the season for the Midnight Sun! The very end of August is the earliest when you can expect to see auroras in Iceland, and even then, your chances are really low.

Where can you see the Northern Lights in Iceland

You need three factors in order to see auroras: darkness, (relatively) clear skies, and aurora activity. If the conditions are right, you can see the Northern Lights anywhere in Iceland. There is no place that’s better than another and you really cannot predict this in advance!

That being said, your chances to see auroras are always higher outside the cities where there is little to no light pollution.

As already said before, it’s really impossible to say where you should stay or which hotels are best for seeing the Northern Lights in Iceland. Auroras are a natural phenomenon, furthermore so much depends on the weather.

So if you see a list of the best hotels to stay for the Northern Lights in Iceland, take it with a grain of salt. They might be amazing hotels and have beautiful remote locations, but they cannot guarantee that you will see auroras. Nobody can.

That being said, when planning your Iceland winter trip itinerary and looking for hotels, try to pick the ones that are somewhat further away from towns. The darker it is near the hotel, the easier it will be to see auroras right there, without having to walk or take a car.

TIP: Using the map below, you can easily compare hotels, apartments, and short-term rentals all over Iceland and find the best deals for your travel dates. You can zoom in or out or simply insert the place name where you want to stay. Alternatively, read on for some specific hotel suggestions for Northern Lights!

And because our readers keep on asking, below are some hotel suggestions along the southern part of the Ring Road, where you could stay during your winter trip and where the surroundings are usually dark enough for auroras.

Here are some nice hotels to see Northern Lights in Iceland:

Once again, note that these are just a few examples. Furthermore, we only chose accommodations that are quite easy to get to and are located in the most popular areas that you can visit in winter. There are many more good places to stay for Northern Lights in Iceland, but seeing them is never guaranteed.

Are the Northern Lights only green in the pictures?

But if you are lucky to witness a strong Northern Lights display, you will see the most phenomenal light show with all shades of green. Sometimes, auroras can also color red or purple. It’s magical!

How to increase your chances of seeing Aurora in Iceland

Here are some tips on how to increase your chances of seeing auroras in Iceland:

What to wear for aurora hunting in Iceland

What to wear for aurora hunting will depend a bit on the month when you visit Iceland. If you are looking for auroras in Iceland in September, you might be ok with a light jacket and a sweater. Whereas in the middle of the winter, you might need to bundle up using every single layer that you have packed (and still be cold)… In general, expect that it will be cold. Very cold.

I recommend overdressing when planning to go aurora hunting – always dress warmer than you think you’ll need. The wind is usually so strong in Iceland that it will feel much colder than the weather forecast might make you think. Also, waiting for auroras means that you sometimes stand still for long periods of time. You’ll quickly get colder than you anticipated.

To give you an idea, here is what I always wear when chasing auroras during the cold winter nights in Iceland:

READ ALSO: What to Wear and What to Pack for Iceland in Winter

There are many Northern Lights tours in Iceland and most of them run from Reykjavik. You can choose between big-bus tours, small-group tours, or private tours. In addition, you can also opt for aurora tours by boat or by super-jeep.

Here you can find the complete selection of aurora tours on GetYourGuide or on Viator. We do not recommend booking with suppliers directly, because their cancelation policy is usually not as flexible. Furthermore, if something goes wrong, it’s practically impossible to get your money back.

We recommend GetYourGuide as the very best website for any tour bookings. They have the most flexible cancelation policy and excellent customer service.

Here are some of the best Northern Lights tours from Reykjavik:

An alternative way to see Aurora Borealis in Iceland

If you are visiting Iceland in summer or if the weather turns out really bad and you don’t get a chance to see the Northern Lights in real life, we recommend that you pay a visit to the Perlan Museum in Reykjavik.

Among other things, you’ll be able to see the Perlan Arora Show, which is almost as good as the real thing. It’s very well done and is absolutely impressive!

I have seen auroras in Iceland and Norway multiple times, but I still found this aurora show worth a visit.

How to photograph the Northern Lights

Northern Lights photography is a bit tricky. First, it’s dark and very cold. Also, if you are lucky to see a really good display, the auroras will be moving and changing intensity all the time. And finally, most tourists only get to see auroras once or twice and don’t have much chance to practice or perfect their aurora photography skills. Often, you’ll be glad if you have one chance!

So if you want to try to take some pictures of the Northern Lights, you have to prepare in advance! And no, you don’t have to be a professional photographer, but it definitely helps to know some basic tips and camera settings to start with.

We have compiled some of our best tips and suggestions for aurora photography for beginners in a separate guide. Click on the link below to read all about it.

To summarize, here are some of the most asked questions in regards to seeing auroras in Iceland:

What is the best month to see Northern Lights in Iceland?

The best months to see Northern Lights in Iceland are between September and March. That’s when the nights are long and dark enough for viewing auroras.

How long do the Northern Lights last?

Can you see Northern Lights from Reykjavik?

Yes, it’s possible to see Northern Lights in Reykjavik. If the aurora display is very strong, you can sometimes see it despite the lights of the city (I have even seen them from my hotel window in Reykjavik). That being said, your chances are always higher in the darker places, a bit outside the city center. The area around Grótta Island Lighthouse is one of the best places to see auroras in Reykjavik.

Can you see the Northern Lights if there is full moon?

Yes, you can see the Northern Lights even if there is a full moon. If the auroras are weak, then the strong moonlight might make it more difficult to see them. But if auroras are strong, it’s definitely possible. Once, I saw a magnificent aurora show that lasted more than 3 hours under the full moon.

Which part of Iceland is best for Northern Lights?

If the conditions are right, you can see the Northern Lights EVERYWHERE in Iceland. There is not one place or region of Iceland that’s better for viewing auroras than another.

What are the chances of seeing Northern Lights in Iceland?

If you are visiting Iceland between September and October, there is always a good chance of seeing the Northern Lights. However, auroras are a natural phenomenal and you need clear skies in order to see them, so you really cannot plan or predict it in advance.

Is Iceland the best country in the world to see the Northern Lights?

More tips for your winter trip to Iceland:

READ ALSO: Best Places to See on the South Coast of Iceland